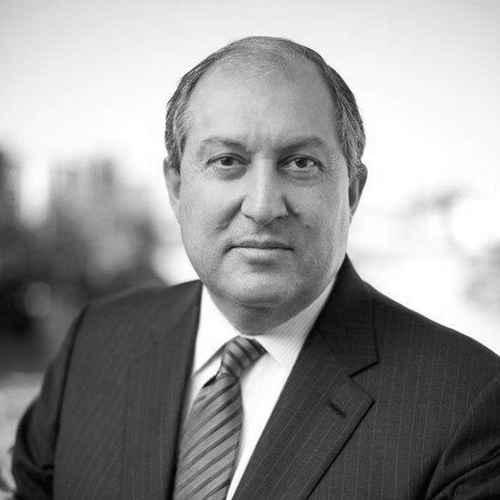 Hon. Armen Sarkissian
Honorary Member of the Board

Armen Sarkissian is the President of the Republic of Armenia. He is the former Ambassador of the Republic of Armenia to the United Kingdom of Great Britain and Northern Ireland. Armen Sarkissian was the Prime Minister of Armenia from November 4, 1996, to March 20, 1997. From 1976 to 1984 he was a professor of physics at the Yerevan State University and, subsequently, the Head of the Department of Computer Modelling of Complex Systems. In 1984 he became a Visiting Research Fellow and later Professor at the University of Cambridge. In October 1991, professor Sarkissian was invited by the President of Armenia to establish in London the first Armenian Embassy in the West. He went on to become Senior Ambassador of the Republic of Armenia to Europe (Deputy Foreign Minister), and concurrently represented Armenia as Ambassador to the European Union, Belgium, the Netherlands, Luxembourg, and the Vatican. In 1995-1996 he was the Head of Mission of the Republic of Armenia to Europe. Professor Sarkissian became Prime Minister of Armenia from 1996 to 1997. He was a reappointed Ambassador to the United Kingdom in 1998. He also served as Special Advisor to the President of the European Bank for Reconstruction and Development and as a Governor of EBRD in 1999-2000. In 2000 Mr. Sarkissian established the Eurasia Research Programme at the Judge Institute of Management, University of Cambridge. He is the Founding President and Chairman of Eurasia House International in London, which fosters critical dialogue and cooperation among political and business leaders and is involved in bridge-building between the West and the vast geographic space extending from Eastern Europe to Russia, to CIS and China. Professor Sarkissian is Senior Executive Advisor to the Board of Directors and Chairman of “Alcatel”, the French telecom giant. He is Senior Advisor to the Chairman of “BP”. He is also Senior Advisor to the CEO and the Board of Directors of “Bekaert” (Belgium), one of the largest steel companies in the world; member of the Board of “Brazil Invest”, a large investment group in Central America; Chairman of “Cambridge Pharmaceuticals”, a UK-based medical and health systems company; and is a Board member of “Rosy Blue” (Belgium). He holds honorary and executive positions in numerous international organizations: he is a Member of the Board of Directors of the East-West Institute; Advisory Board Member of the Kennedy School of Government, Harvard University; IREX, Editorial Board Member of Russia in “Global Politics” foreign affairs journal; and Honorary Senior Research Fellow at the School of Mathematical Sciences, Queen Mary & Westfield College, London University. Professor Sarkissian is a faculty member of the World Economic Forum.