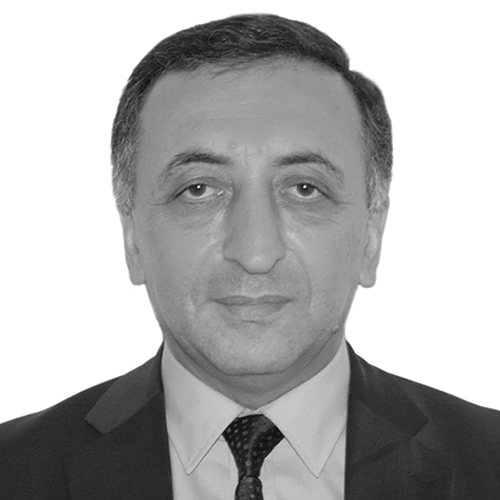 Dr. Vardan Sahakian
Member of the Board

Vardan Sahakian is a Senior Scientist and the Head of High Energy Gamma Ray Astrophysics Group at the A. I. Alikhanyan National Science Laboratory. He was the Deputy Chairman of the State Committee of Science of the Republic of Armenia since 2015 and held the position of Head of Department for Science Policy in 2009-2015. He received a Master’s Degree in theoretical nuclear physics from the Moscow Engineering Physics Institute in 1982, and a PhD degree in elementary particle and nuclear physics from the P. N. Lebedev Physical Institute of the Academy of Sciences of the USSR, in 1986. In 1986, Vardan joined Primary Gamma-Ray Radiation Division, Yerevan Physics Institute, as a researcher (Junior Researcher, Researcher, and Senior Researcher), and in 2000 became Head of Very High Energy Gamma-Ray Astrophysics Group. In 1993-1995 he worked as a researcher at the Division of Gamma-Ray Astrophysics at LAL (Laboratoire de l’Accelerateur Lineaire), Orsay, France. His research interests include High Energy Physics, Cosmic Ray Physics, Very High Energy Gamma-Ray Astrophysics, Mathematical Modeling, and Numerical Simulations. He is author and co-author of numerous publications in refereed scientific journals. He is the member of the H.E.S.S. (High Energy Stereoscopic System) international research collaboration (gamma-ray astronomy), as well as the participant of the Board of Governors of the Joint Research Centre of the European Commission (BoG of the EC JRC), member of European Research Area Committee (ERAC) and Eastern Partnership Panel on Research and Innovation (EaP Panel on R&I). Vardan received the Prize of the President of the Republic of Armenia in 2005, and the Descartes Prize of the European Union (as a member of the H.E.S.S. collaboration) in 2006.