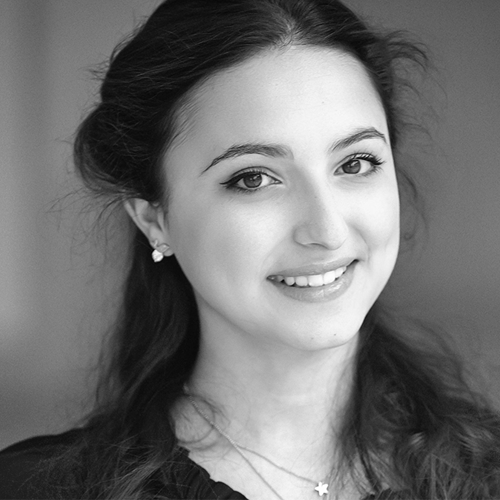 Anna Srapionyan took her first steps on the path of discovering the world of mathematics in the Special Physics-Mathematical School under the Yerevan State University. Ever since entering the school in the sixth grade, Anna has participated in many regional, state and international olympiads in mathematics and has received awards and diplomas.

In 2009, she received the Republic of Armenia Presidential Best Student in IT Sphere” Award of the first degree, and a Gold Medal for excellence in her studies during all ten years of school. In 2013, Anna received Bachelor’s degree in mathematics from the Yerevan State University. Afterwards, she started working towards her Master of Science degree in financial mathematics at the University of Chicago, and received the degree in 2014.

Being an explorer by nature, she got very interested in doing research in financial mathematics, and decided to pursue a PhD degree. Currently, she is a PhD candidate at the Cornell University’s Center for Applied Mathematics, where she works with amazing researchers and colleagues. Her research interests include stochastic processes and probability theory with applications in finance. In particular, she works on risk neutralization techniques which, for example, can be useful for getting numerically attractive formulas for derivatives pricing. Since teaching is one of her passions, she is very grateful to have opportunities to serve as an instructor, as a teaching assistant (TA), and as a TA trainer for the Engineering College at Cornell.

Also, she has always been actively involved with some of the wonderful educational foundations in Armenia such as the “Ayb” Educational Foundation, and the “Luys” Foundation. It all started in 2007 when Anna was selected to be one of the eight students to participate in intensive subject courses for high school students by “Ayb”, where first time ever she believed in the possibility of studying in one of the top universities of the world. Anna has later joined the “Luys” Foundation first by participating in the “Mentorship and Develop Armenia Together” programs as a mentee, then becoming an intern, and finally joining the “Luys” Team as a mentorship community coordinator.