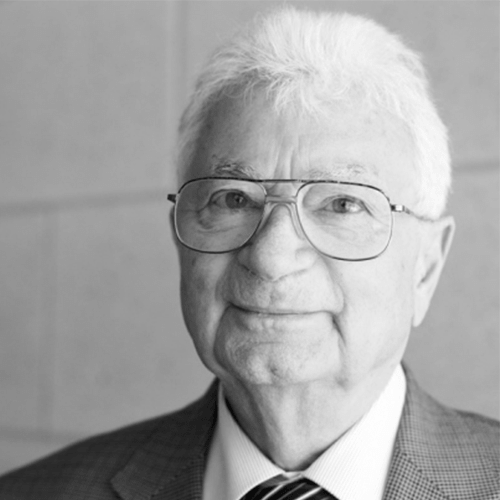 Dr. Yuri Oganessian
Member of the Board

Prominent experimental physicist Yuri Oganessian is widely known for his works in the field of nuclear physics, research on nuclear reactions, experiments on synthesis and investigation of the properties of new elements of D.I. Mendeleev periodic table. The whole life of professor Oganessian has been closely connected with the Joint Institute for Nuclear Research in Dubna (Russia), where he was sent to work after graduating from the Moscow Engineering Physics Institute in 1956. He has made his way from a young engineer, head of the accelerator start-adjusting group, to the director and scientific leader of the Flerov Laboratory of Nuclear Reactions. Here he defended his Candidate and Doctor of Science theses, has become Professor and a Full Member of the Russian Academy of Sciences. He is an author of three discoveries, a monograph, 11 inventions, more than 300 scientific papers. Yu. Ts. Oganessian continues his intensive and fruitful work, retaining leadership in heavy-ion physics, establishing efficient cooperation with leading laboratories of Europe, Asia, and America. On his initiative and under his direct guidance, a unique accelerator complex is being created in Dubna for experiments with radioactive beams, super modern experimental facilities are being projected and constructed, perspective research programs of world level are being planned and realized. Yu. Ts. Oganessian pays much attention to introducing achievements of science into practice. Under his guidance, unique high technologies of creating new materials and producing radioisotopes for medicine and ecology have been developed on the basis of the JINR accelerators. As the Chairman of the RAS Scientific Council on Applied Nuclear Physics, he coordinates applied research at the country’s leading nuclear physics centers. Yu. Ts. Oganessian gives constant attention to scientific manpower training. He is the head of the “Experimental Methods in Nuclear Physics” branch chair of the Moscow Engineering Physics Institute, Chairman of the Dissertation Council in Dubna. There are 6 Doctors of Science and more than 20 Candidates of Science among his disciples, specialists both from Russia and JINR Member States. Yu. Ts. Oganessian’s scientific work has been marked with the USSR State Prize (1975), the I. V. Kurchatov Prize (USSR AS, 1989), the G. N. Flerov Prize (JINR, 1993), the A. von Humboldt Prize (Germany, 1995), the L. Meitner Prize (European Physical Society, 2000), the MAIK “Nauka/Interperiodika” Prize (2001), as well as with governmental awards: the Order of the Red Banner of Labor, the Order for Service to the Fatherland of the fourth degree (1999), the Order for Service to the Fatherland of the third degree (2003), the Order of Friendship of Peoples. He has been awarded orders and medals of the JINR Member States. Over years, professor Oganessian has been a member of the editorial boards of the “Journal of Physics”, “Nuclear Physics News International”, “Il Nuovo Cimento”, “Physics of Elementary Particles and Atomic Nuclei”, “Particle Accelerators”, as well as a member of the Scientific Councils of GANIL (France) and RIKEN (Japan). Yu. Ts. Oganessian has been elected a foreign member of the Serbian Academy of Sciences and Arts (1995), Honorary Doctor of the Goethe University (Frankfurt am Main, Germany, 2002), and the University of Messina (Italy, 2002). On 28 November 2016, the IUPAC approved the name “oganesson” (symbol Og) for element 118 in the periodic table of the elements.