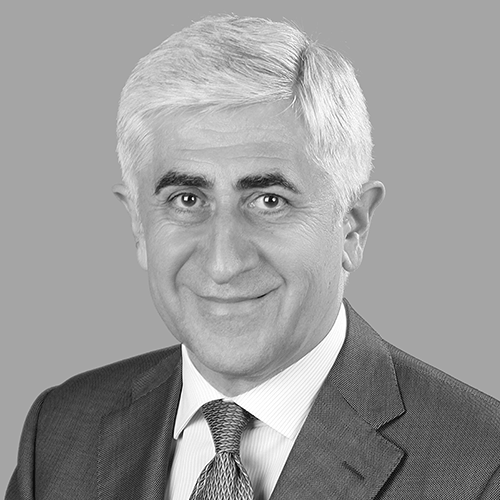 Dr. Mikhail Pogosyan
Member of the Board

Mikhail Pogosyan is the Rector of Moscow Aviation Institute (National Research University), a member of the Russian Academy of Sciences. Mr. Pogosyan graduated aeronautical engineering faculty of the Moscow Aviation Institute after S. Ordzhonikidze in 1979. After graduation, Mr. Pogosyan was sent to Moscow Machine Engineering Plant after P.O. Sukhoi. He started his way as a design engineer and came up through the ranks of the First Deputy of the General Designer, the Chairman of the Board of Directors of Experimental Design Bureau (OKB) and the general director of Sukhoi Design Bureau. In 2002 he was assigned with the academic degree of Doctor of Technical Sciences (thesis topic: “Development and implementation of advanced technologies for the creation of new generation aircraft complexes”). In 2003 he was elected as a corresponding member of the Russian Academy of Sciences in the Department of Energy, Mechanical Engineering, Mechanics and Control Processes. Since 2011 he is a full member of the Russian Academy of Sciences in the Energy, Mechanical Engineering, Mechanics and Control Processes. From 1998 to 2011 Mr. Pogosyan held the position of the General Director of Sukhoi Company. From 2008 to 2011 he held the office of General Director of Russian Aircraft Corporation, MiG. Under his leadership, a Su-MiG frontal aviation aircraft family was created, which ensures the country's defense capability and Russia's stable positions in the world market. From 2011 to 2015 he was the President of United Aircraft Corporation. During that time the production of airplanes increased, the passenger airliner Sukhoi Superjet was launched in the series and certified according to the International standards. Since 2004 he is the head of the MAI department 101 “Design and Certification of Aviation Equipment”. Since 2017 he heads the Commission for the Development of Science and Education in the Public Chamber of the Russian Federation. Mikhail Pogosyan has more than 80 publications, including educational publications, scientific works and intellectual property objects that are used in the educational process. Mr. Pogosyan actively participates in the scientific and scientific-pedagogical activity of the department and faculty, he is the scientific advisor of the postgraduate students of the department, member of MAI Academic Council, member of the Council for Science and Education under the President of the Russian Federation, and is an honorary professor at the Kazan State Technical University named after A.N. Tupolev. He was awarded the medal “In commemoration of the 850th anniversary of Moscow”, the Order of Honor, the II degree Stolypin medal. Also, he was awarded the title of laureate of the State Prize of the Russian Federation in the field of literature and art and the winner of the Prize of the Government of the Russian Federation also was awarded the title of “Honorary Machine Builder” and has the Certificate of Honor of the Government of the Russian Federation. He was awarded the Order of the Commander of the Order of Merit for the Italian Republic, and the Chevalier of the Order of the “Honorary Legion” for his contribution to the development of Russian-French cooperation in the field of aircraft construction.